Blaise Gapp to represent the IFA in Portugal

We recently announced a really exciting partnership between the International Futsal Academy and Portuguese club ABC Nelas.  We are now delighted to announce that Blaise Gapp will be the first IFA graduate travelling to Portugal on 19th August 2018.  Blaise has been a huge credit to the futsal programme at Loughborough and we are thrilled… View Article

The IFA announce partnership with ABC Nelas of Portugal

The International Futsal Academy are delighted to announce a formal partnership with the Portuguese futsal club ABC Nelas. ABC Nelas are known for their work in developing their academy players, from as young as 6 years old, to go on to become hugely successful players. Their most successful alumni to date is André Coelho, who… View Article

Are you interested in futsal, one of the world’s fastest growing sports, and would like to be in a performance programme alongside your studies? Would you like to be part of the Loughborough Sports experience – the educational choice for athletes from all over the world? At the International Futsal Academy (IFA) we offer our… View Article 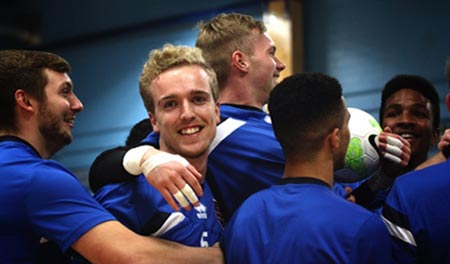 When Head Coach Joao Almeida agreed to deliver a futsal specific goalkeeping session for our visiting Chinese students, we didn’t imagine our goalkeepers would end up with a fan club

Juanan Garcia, IFA head coach and manager of Loughborough’s Super League team in the 2016/17 season, has signed for futsal giants Inter Movistar of Madrid, to lead their U19s side in the Division the Honor Juvenil, a team that will aspire to be Spanish youth futsal national champions. After a successful season, that saw Loughborough… View Article
Page 3 of 16«12345...10...»Last »
Reports